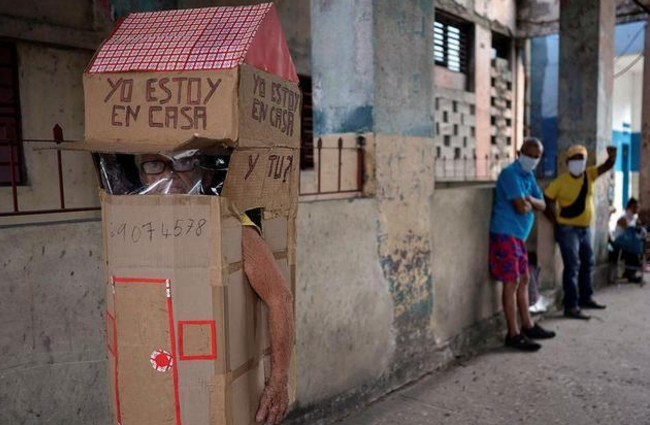 Feridia Rojas, 82, from Havana, Cuba, decided to build and wear a cardboard box herself to protect her from the virus, which is very dangerous to the elderly in the country as personal protective equipment is not widely available. "I am at home. What about you?" reads a message on her box, in a witty nod to Cuba's coronavirus(冠状病毒) slogan "Stay at home".
The old woman, whose daughters both live in the United States, said with no one to help her with daily necessities, she had to find a way to do so safely by herself. "I was worried about the cases who could cough just as I passed," she said. "So I thought I would do a little house with a cardboard box and wear it."
Rojas used to work as a nurse. She got the box from somewhere in her Palatino neighbourhood and cut arm holes and a window for her face which she covered in clear plastic. On the top, she glued cake boxes to make it look more like a house with a roof than a flat-topped apartment building. "She's very creative," her neighbour Zayda Echemendia said with a smile, adding that Rojas still helped local people with injections for free at home.
While her mobile home may be less necessary as Cuba's outbreak appears to have come under control, it still brought people a lot of joy. "With stress and anxiety during this time, my little home makes people laugh," she said.
本时文内容由奇速英语国际教育研究院原创编写，未经书面授权，禁止复制和任何商业用途，版权所有，侵权必究！(免费同步微课、每日口语、单词速记关注奇速优课公众号)
请先登录
最新评论
点击显示
本文翻译请先完成本篇阅读