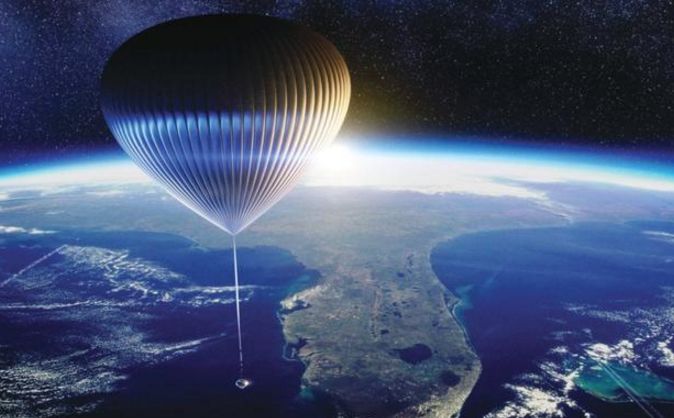 A space startup company is planning to launch tourists way up into Earth's atmosphere in a giant balloon. This trip to the stratosphere, which is a place between about 10 and 50 kilometres above the surface of the earth, will give lucky guests wonderful views of the planet and the curvature of the Earth. Space Perspective is the company behind the out of this world travel plans.
It recently announced the development of its “Spaceship Neptune”, a flying space balloon that carries a pod. This pod aims to hold nine people, a minibar, a toilet and plenty of large windows. The aim is for the giant balloon to fly tourists 10,000 feet into the stratosphere in a pressurized capsule(密封舱). The trip would involve a two-hour upward journey. Once there, the plan is to hover over the Atlantic Ocean for two hours, which means that you will stay in the same position in the air for a long time and then there's a two-hour trip back down. Test flights without people are expected to begin in 2021. If all goes well, tickets could be sold as early as 2024. However, reports suggest these will cost a large sum of money, which may reach up to $125,000.
Space Perspective was founded by Jane Poynter and Taber McCallum. Their website states, "For the first time, we can make the exciting spaceflight accessible to you, our explorers, in a safe, comfortable manner with the fewest physical requirements and as simple as boarding an airplane. Our pressurized capsule affords a shirt-sleeves environment, and comes with a refreshments bar and a toilet , of course." The nine people on board will include a pilot. The aim by the end of the decade is to have 500 of these missions taking off from Kennedy Space Center in Cape Canaveral, Florida, each year.
本时文内容由奇速英语国际教育研究院原创编写，未经书面授权，禁止复制和任何商业用途，版权所有，侵权必究！(免费同步微课、每日口语、单词速记关注奇速优课公众号)
请先登录
最新评论
点击显示
本文翻译请先完成本篇阅读