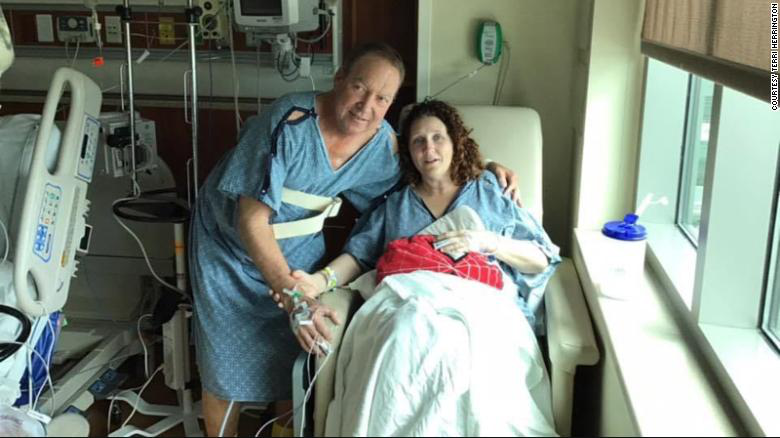 When Terri Herrington's husband Bryan died 16 years ago, who lost his life in a tragic fall from a house while on the job, he saved the lives of four other people through organ donation. Terri befriended Jeffrey Granger, who received Bryan's kidney and pancreas. In 2004, Granger’s doctor delivered the news that he needed a transplant. After the operation, Granger said his life was great, and he was feeling "wonderful" despite the side effects of the medicine.
For the first year after the transplant, Granger was not allowed to know who made the lifesaving organ donation, and Terri was not allowed to know who received it. But during that first year, the two exchanged anonymous notes and holiday cards to each other. Later, Terri was able to send Granger a card introducing herself and telling Granger about Bryan. When they first spoke on the phone, Granger said it felt like the two had known each other their whole lives. Over the next 15 years, a tight friendship developed.
In 2019, the donated kidney started failing and Granger went back on dialysis. He reached out to Terri with the news. She had recently considered becoming a living donor and immediately decided that Granger was the person she wanted to have her kidney. She was so quick to offer to be his donor that Granger thought it was a joke. Terri responded by asking, "Did you think I was kidding?" When Granger admitted that he did not take her offer seriously, she said she was serious as a new kidney!
Not only were Bryan and Terri Herrington both matches for Granger, but so was Granger's wife, Pam. Today, Terri's kidney is sitting right next to the kidney donated by her late husband. Terri says, "We are back together." Dr. Mark Johnson, who operated on Terri during the transplant at UF Health Shands Hospital, said he never heard of a case of a husband and wife donating organs to the same person.
本时文内容由奇速英语国际教育研究院原创编写，未经书面授权，禁止复制和任何商业用途，版权所有，侵权必究！(免费同步微课、每日口语、单词速记关注奇速优课公众号)
请先登录
最新评论
点击显示
本文翻译请先完成本篇阅读