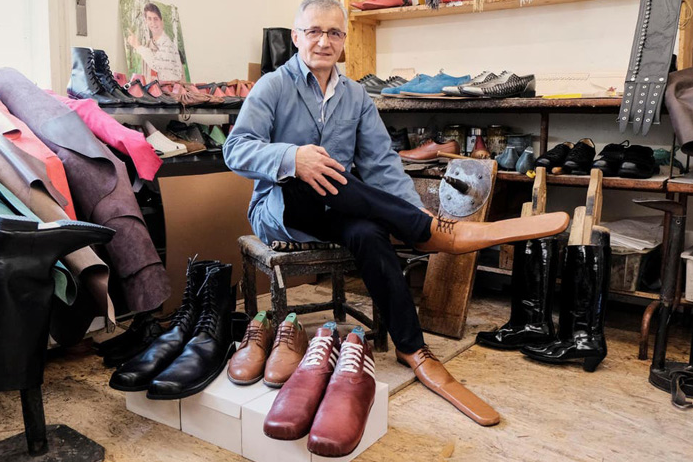 Grigore Lup, from the Transylvanian city of Cluj in Romania, has been making leather shoes for 39 years. When the coronavirus pandemic（新冠疫情） hit, the shoemaker, whose shop “relies heavily on custom orders from theatres and opera houses across the country, as well as traditional folk dance ensembles,” saw his business begin to go down.
However, according to Lup, as people were allowed to move across Europe, he realized that people weren’t taking social distancing seriously, so he came up with the very long shoes as a way for them to keep their distance. "You can see on the street people are not respecting social distancing rules,” Lup said. “I went to the market to buy plants for my garden. There weren’t many people there but they kept getting closer and closer. If two people wearing these shoes were facing each other, there would be almost one-and-a-half metres between them.”
The shoes in question, adapted from a previous model Lup made for actors, are a European size 75 and require almost one square metre of leather, which makes the cost rise up. Lup has since received five orders for the $115 shoes, which take him two days to make.
On social media, the special shoes have been met with amusement, with many comparing them to flippers. "This is cute and absurd,” one person tweeted, while another said the shoes “seem like scuba fins.”
本时文内容由奇速英语国际教育研究院原创编写，未经书面授权，禁止复制和任何商业用途，版权所有，侵权必究！(免费同步微课、每日口语、单词速记关注奇速优课公众号)
请先登录
最新评论
点击显示
本文翻译请先完成本篇阅读